Skip to content
Loading...
Latest news
Transform your job into your hobby!
Snowflake event: Data Cloud World Tour
AI generated art: The Good, The Bad and the Ugly
What brings Azure Purview to the table for the future of Data Governance?
Contextualizing Visualizations
Data Science 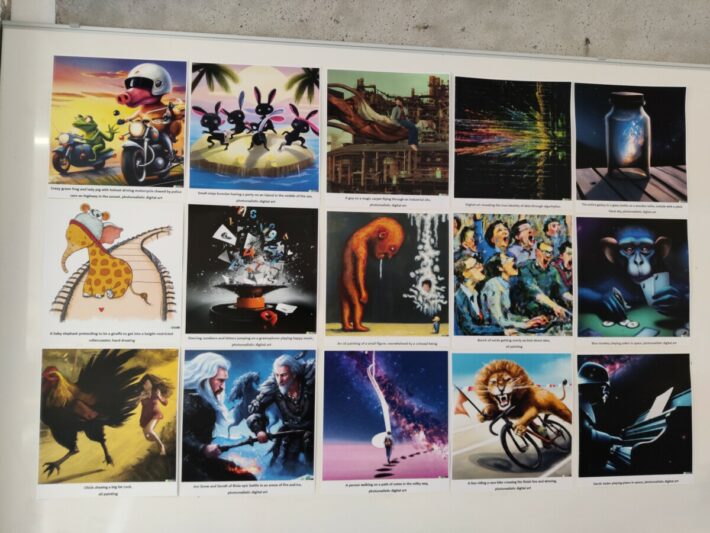 Every year, I have a tradition of listening to the MTV unplugged performance of Nirvana (1993) on Youtube. Last year, a comment on one of the videos really struck a chord with me. It read something along the lines of, “Every time I watch this video, I get older, but Kurt remains 27 years old”. For those not aware, Kurt Cobain, the lead singer of Nirvana, commit suicide at merely 27 years old.

I was in complete awe. Although AI-generated simulations have emerged from all corners, this particular work really make me just stop for a few seconds and contemplate. It did however, also leave me with a bittersweet feeling. Because as inspiring as I found this work, it felt undeniably and equally scary.

Whenever I experience such heavy emotions or become ecstatic about AI, I feel personally responsible to share this feeling with others. Up until this point, no AI application seemed as mature and accessible as DALL-E. It kept consistently paving its way through traditional media. And it’s one of the reasons why DALL-E seemed like a perfect opportunity to raise awareness about the AI state-of-the-art at Algorhythm in a fun way.

It’s not easy to raise awareness about AI without the novelty wearing off within the very first day. That’s why we organized a contest which has the following benefits:

The idea behind the AI-generated art contest was simple. We sent out a form to collect one sentence per person along with a style of choice (oil painting, hand drawing, photorealistic and more). The collected sentences and styles were then used to generate images with DALL-E (4 images per submission). The images were presented to the participants for approval, or to allow them to resubmit a sentence in case they were not satisfied. At the end of the deadline, the approved images were printed and displayed at the office, and a virtual gallery. Participants then had to vote for their favorite submission and based on the votes, three winners were picked who received a prize for their efforts.

There were some guidelines that participants could follow prior to submitting their sentences. Admittedly, this was set in place to ensure the generated images would not fall (too) short of expectations. In summary, participants were advised to submit rather short sentences than really long sentences and to remain as specific as possible through the use of nouns and verbs (unless of course being abstract is key to the art).

Participants when faced with their AI generated images weren’t always positively surprised. In most cases, the trust in DALL-E started out embarrassingly low, especially if participants initially had high expectations. Fortunately, we know that human trust in AI is malleable. Rather than accepting this defeat, we insisted on trying variations of the original sentence (adjustments in phrasing, or new styles) or simply trying new sentences. And almost in all cases, participants were much more satisfied with the result and showed signs that their trust in DALL-E was restored.

In the process of providing suggestions and being confronted with feedback, criticism and disappointment, we ourselves gained an expert intuition of what DALL-E can and just simply cannot do. This bring us to our next point.

Some submissions had to be redone due to containing or implying violence. In that case, either the model completely ignore the query or sent a notification with a reminder of the OpenAI Content Policy. Another difficulty that we experienced was with submissions containing characters from movies or cartoons. For example, DALL-E failed to recreate a Winnie-the-Pooh. Instead, it created some bizarre looking bear with no resemblance whatsoever. It also failed to accurately portray the football player Messi, who according to a submission, was supposed to be cleaning the shoes of Ronaldo. DALL-E was however, successful in generating Darth Vader. So it’s hard to predict how DALL-E will handle such sentences and it’s unclear whether this is due to an underlying filter (to avoid liability with copyright) or because the original images are underrepresented in the model.

So to summarize, you should consider the following limitations:

As an expert user, even I sometimes lose sight of the fact that DALL-E is trained on millions of images on the internet. Now, if you’re not aware of the whole internet thing, it can contain images damaging to the eye and the soul. As much as developers of text-to-image models try to filter out training instances that are inappropriate, nothing stops people from fine-tuning an open-source model to generate NSFW content. And from that point on, you can image just how ugly and unethical it can get.

Last but not least, there is another major debate on ethics that is floating around AI-generated art. That is, who is the rightful owner and creator of these images? It’s hard to say. We would have to define what it means to own art when it is completely learned and stored in the form of low-level patterns represented by a bunch of numbers in an endless layer of connected neurons. If you happen to tear a copy of the Mona Lisa in a million pieces and create a unique image using these pieces, then surely it’s now work of your own? One thing is certain, it is going to be a challenging philosophical debate and I doubt it will be resolved so easily.

The DALL-E art contest can be summarized as one of the most fun and positive learning experiences that we engaged in as a business unit. Participants were very impressed with the paintings hanging proudly in the office. Hopefully, they also have seen the bigger picture (pun intended). The fact that AI just doesn’t work magically. That it heavily requires humans to manage the interaction between AI and end users, most preferably in an intelligent way for it to be really effective. And the fact that we can learn so much by sparking engagement between AI and people. This is our cue at Algorhythm to think and invest more in the human-computer interactions aspect of building AI solutions.

With that being said, the future seems to be looking bright for AI-generated content. Don’t believe me? Check out AI-generated videos and AI-generated fashion. As optimistic as this sounds, there is a dark side to AI-generated content that is not to be underestimated. No matter how things develop with this technology, we will always be rooting for responsible and ethical AI.

We sincerely hope that you enjoyed reading this blog. Please stay tuned to Algorhythm Blogs for more on AI generated content.