Skip to content
Loading...
Latest news
Transform your job into your hobby!
Snowflake event: Data Cloud World Tour
AI generated art: The Good, The Bad and the Ugly
What brings Azure Purview to the table for the future of Data Governance?
Contextualizing Visualizations
Data EngineeringEvents & Webinars 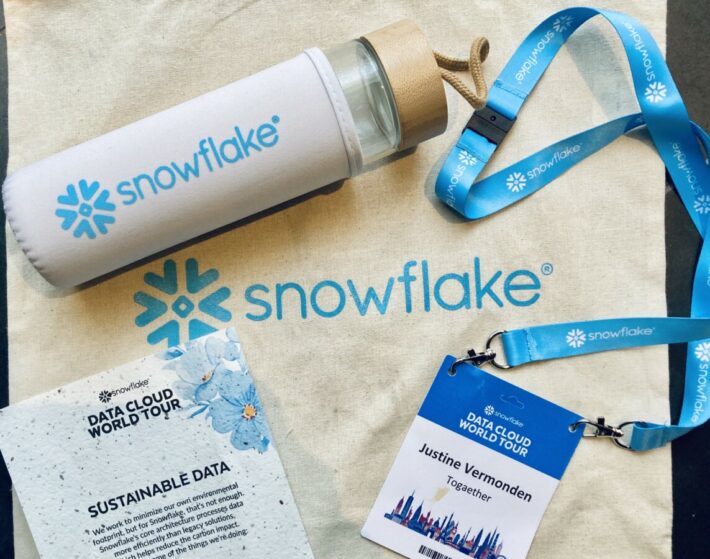 On a rainy, drizzly day in October, Snowflake’s Data Cloud World Tour stopped in Circl, Amsterdam. Together with my two colleagues Pieter-Jan Dijs and Raf De Backer we made the trip to the Dutch capital. Once dried up inside, friendly faces greeted us and handed over our badges. Proudly wearing the Snowflake necklace made me feel included in the Snowflake family on my very first event. I was extremely eager to learn more about Snowflake’s possibilities and its perception among other enthusiasts.

After a delicious cup of coffee, it was time to attend the opening keynote. The first welcome was given by Alison Tierney, who quickly handed over the stage to CEO Frank Slootman. Noticeably very proud, Slootman started in Dutch, wanting to honor his roots. After that brief introduction, he continued (now in English, respecting the very diverse audience) by giving an overview of Snowflake’s history and growth. Proudly, he mentioned there never was another company that reached the one billion dollars annual revenues as fast as Snowflake did. Slootman is even convinced that Snowflake will be the fastest to reach two billion dollars as well. Something to look forward to.

Following Slootman’s overview on Snowflake as a company, co-founder Benoit Dageville continued by explaining more about the platform that is Snowflake. One important message he gave, was that data (and the data model) is always key, no matter which platform you use. Something we heavily agree on at togaether.

Next on stage, Fawad Qureshi started a live demo of Snowpark. Finally, the opening keynote was concluded by an insightful customer panel, including Booking.com and Picnic.

Earlier, when Slootman handed the word to Dageville, he playfully mentioned Dageville was taking us to ten feet under ground, referencing to the more in-depth explanation he was going to provide. Ironically, all other sessions of the day were literally taking place in the basement of the Circl building. We could have known at this moment it was going to be an educational day.

A total of twenty-one sessions were scheduled during the day. Following the divide-and-conquer strategy, we split up to gain as much information as possible. Those sessions were very divers, from customer use cases, over Snowflake best practices to a modern data architecture. Everything seemed to be covered.

To give a few examples, Dimitri Nedev showed how Booking.com is using the Snowflake Platform to process their immense amount of data. On a more technical note, Wim Villano explained in another session the concept of data clean rooms in Snowflake. He showed in very clear examples how data can securely be shared, without actually sharing your data. This session was extremely interesting, and I am very eager to investigate its possibilities even further.

As equality and diversity is very important at Snowflake, there was a session exclusively led by women. In this session, they handled the importance of data culture by providing their personal experience. That way, the audience was able to learn from their challenges and insights when building and scaling data capability.

Being present at the Data Cloud World Tour was really enriching. However, only few sessions were described in this article, as some choices had to be made, both in writing and in attending the sessions during the event. Not only did Snowflake give us the opportunity to learn from experts (both Snowflake’s as their customers’), but they also gave us the opportunity to connect with like-minded souls. After an instructive day, it was time to return home satisfied. When leaving Circl and noticing the rain had stopped, we could only think about one thing.